Please visit Sizzix.co.uk if you are located outside of the USA, Canada and China.

Go to Sizzix UK
Search
Stay Connected with Our Blog

By clicking the Subscribe button, you are confirming that you are over 13 years of age and you consent to receive emails whenever we add new content to our blog. See our Privacy Policy to learn how we protect your personal data.
Connect with us:
Must Read
View All
Instagram Feed
Pinterest
View All
Tags
Categories
Community Poll

Have a Great Day Card 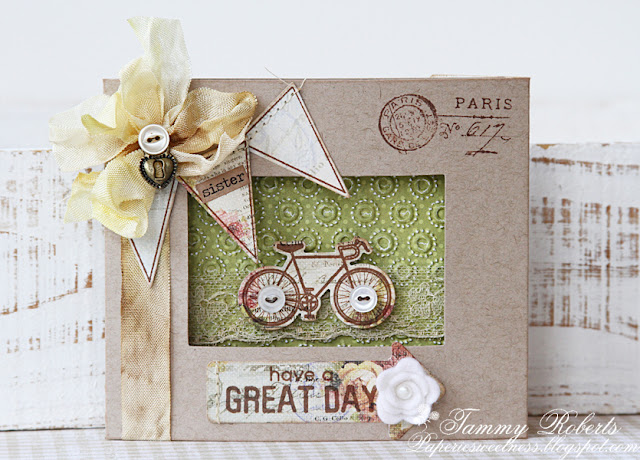 Hello everyone! Today, I have a card to share with you. It features a banner, arrow, bicycle and a felt flower... all of my favorite little things! So, let's get started. The card base is the Sizzix Scoreboards XL Die - Frame, Mailable...yes, it is a frame but, I thought it would make a great card too (and it did)! 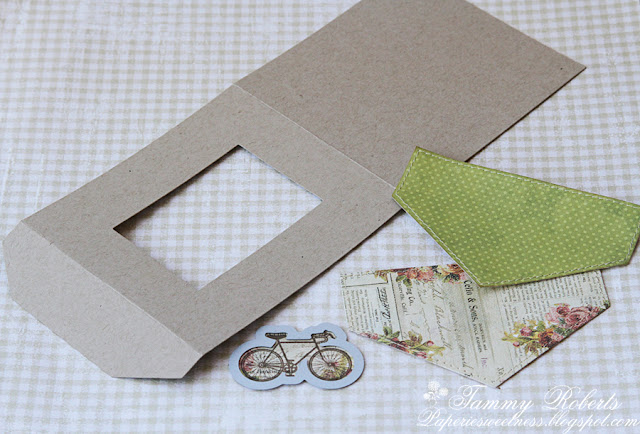 Die cut one Frame from a 6 X 11 sheet of kraft cardstock, aligning the edge of paper just above the cutting line (straight edge) of frame... in other words, you will not get the whole length of the frame, some of the pointed end will not cut do to the length of the paper. Now, die cut two lower ends of the frame from patterned paper. Die cut them just above the score line and then trim them to fit the flap. Machine stitch around the flaps. Now, I will be referring to the frame as a card. 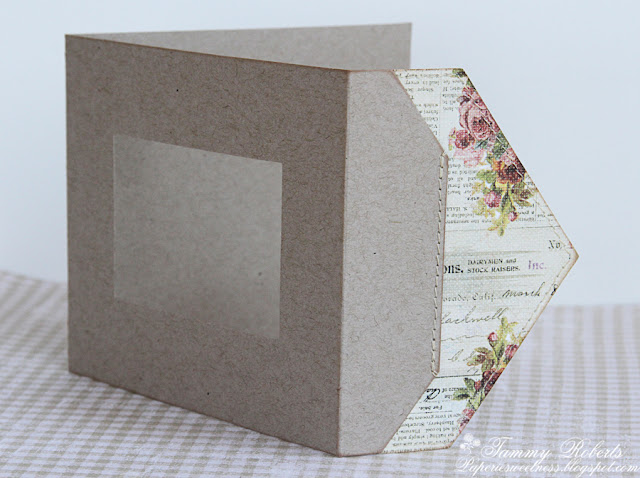 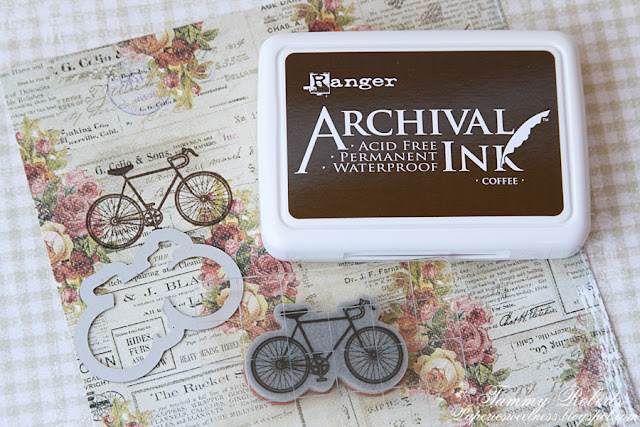 Using the Framelits Die Set - Bicycle, stamp the medium sized bicycle onto patterned paper, then place the coordinating bicycle framelit on top of the stamped image and die cut. 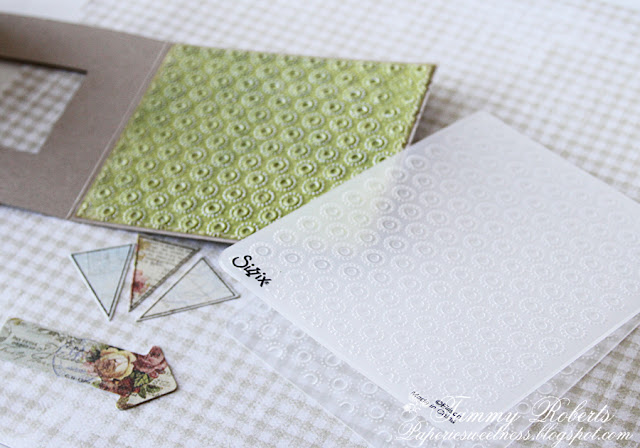 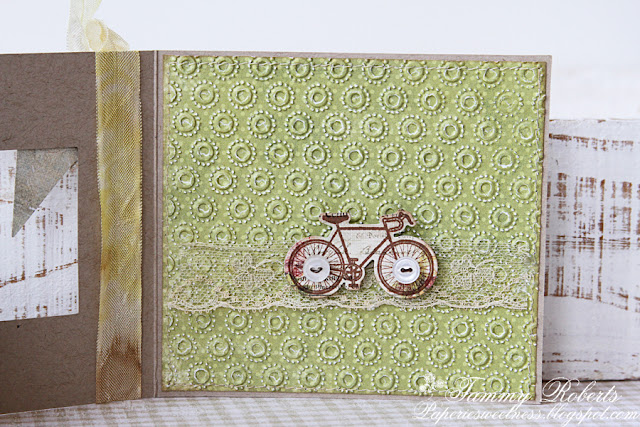 Adhere a piece of lace about an inch up from the bottom of paper (shut the card to make sure the lace is aligned the way you want it to be). Using some Pop Dots, adhere the bicycle in the center of lace again, you might want to shut the card then adhere it so that you get it centered correctly. Adhere buttons in the center of the wheels. 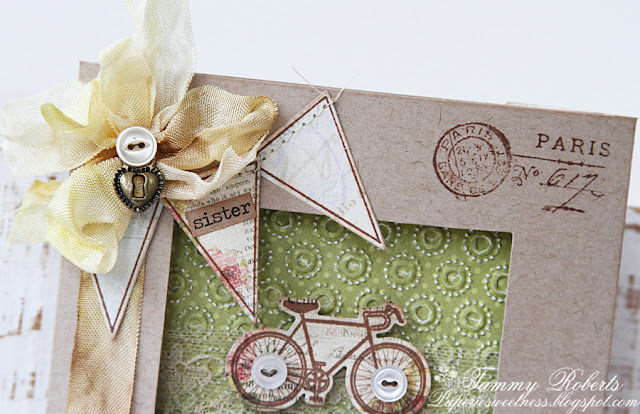 Wrap a piece of seam binding or ribbon around the front of card and adhere, tie a bow and adhere to the top left corner, adhere heart and button in center of bow. Machine stitch (or just adhere) together the three banner pieces leaving a few inches of thread at each end for tying, adhere the word sticker (sister) in the middle banner. Stamp the "Paris" image in the top right corner of card. 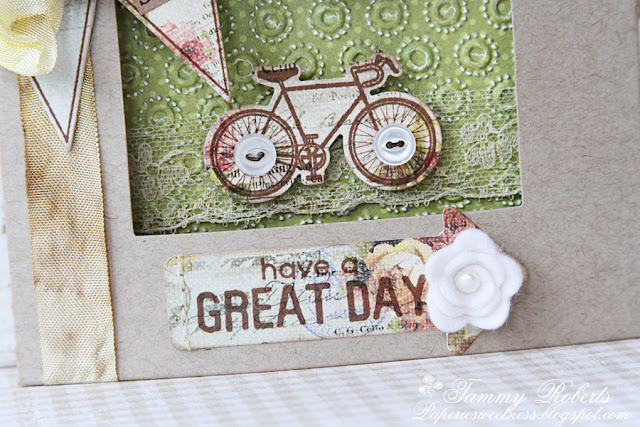 Stamp the sentiment in the arrow, adhere the arrow at the bottom of the card. Using the Flowers, 3-D die, cut from felt the smaller flower. I only rolled the flower about three or four times and then cut the excess because I wanted the flower to be smaller to fit into the arrow. Adhere a pearl into the center of flower. 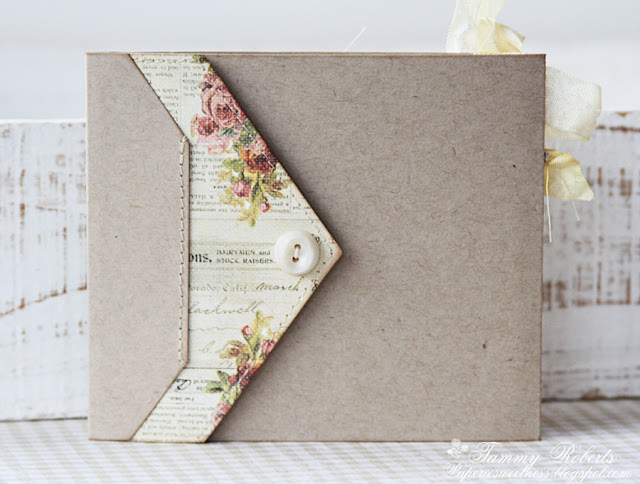 Flip the card to the back and adhere a button at the end of the flap... all done!
Thank you for stopping by today...
Tammy R.

This entry was posted in Cards & Tags and tagged Hero Arts, Eileen Hull, Framelits on Jun 13, 2012 by Sizzix. ← Previous Post Next Post →

10 thoughts on “Have a Great Day Card”