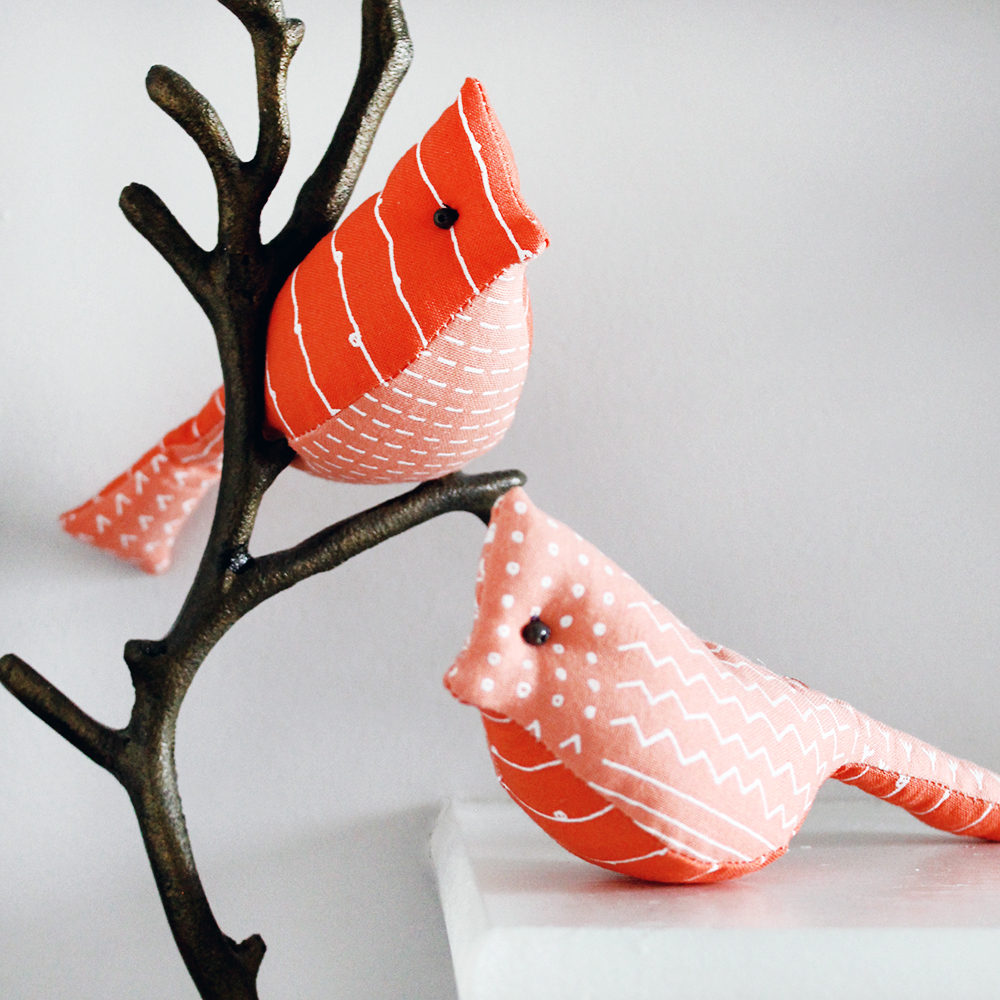 Hello! Jessee here, from an Art School Dropout’s life, with some step by step photos to help you assemble these adorable plush birds. I used the Bigz L - Bird & Egg die from the artist know as Kid Giddy. It can be used in the Fabi machine or larger and every piece you need is on just one die.

As always the first step is to get out your Sizzix machine of choose and prep everything. I used two leftover 10" squares from a previous project to make these birds, but again, you can use scraps or small pieces of fabric that you make have lying around. These birds don't take much.

Since I plan on making two birds, I folded my 10" square so it was doubled up over the birds body parts, and then was single on it's belly part. There is also a piece for making a ball or egg, but I chose to only make the birds this time around.

I did the same thing to my second 10" square and stacked them. This made it so I only had to run the die through the machine once.

Using the Sizzix sandwich, cutting pad then die with blades facing up then material and then another cutting pad, run the whole thing through your machine.

You should end up with the pieces shown above, plus a few extra tidbits from what would make the ball. There is no way around that.

To start assembling the birds, first place two bird sides together. Make sure they are wrong sides together, and pin to secure.No need to go overboard on the pins, I used two just to make sure nothing moved around.

Next, using a 1/4" seam allowance, sew from the top of the birds beak, up to the top of its head and halfway down its back. Secure your stitches. Then skip about a 1/2-3/4" down and Start sewing again, securing your stitches at the beginning and stop at the tip of the tail. By stopping and starting again, you have given yourself a hole to help turn the bird inside out later on. Please do not miss this step!! You'll regret it later.

After the tops have been sewn together, it is time to attach the belly of the birds. The die is made so that the bottom and sides fit perfectly together. I noticed it was easier to start at the tail, and start pinning from there. The pinning looks messy in the photo, but that's only because I pinned a curve and it's hard to photograph. After everything is pinned together, start sewing from the tail all the way to the beak. Repeat this tep for both sides of the belly. Do not sew the tail or beak shut yet.

Once both sides are secured, clip the seam allowance around any curves, making sure to not snip into the seam itself. This will help make a smoother finished product in the end.

Now open the seam on the top of the birds back near the tail and flatten it out. Sew across the back of the tail, securing the seams at the end.

Repeat this step for the beak too.

I didn't know how to take photos of this step, so I'll just say to turn the birds inside out using that hole you left yourself on the birds back. Be very gentle with any seams you clipped near. I personally found out the tension on my machine was off when I made my first set of birds because a seam started to come loose!! So lesson learned, always check the tension before starting a new project, especially if you use different weight threads all the time!!

Now the birds are all ready for stuffing! I used some Poly-Fill that I had on hand, but you can use whatever stuffing works best for you. Same goes for tools! I normally would use a plastic tool that I have that is specifically meant for stuffing plush toys, but my daughter used it and now it's missing, so instead I used this dowel.

I suggest starting with a small ball of filling for the first part, this is the perfect amount for the tail. I noticed the tail just didn't lay right if you stuffed it too much, so watch out for that!

After you get the tail just right, then go ahead and stuff the rest of the bird. I stuffed it until it was firm, but not so full that it look deformed.

Using coordinating thread, stitch closed the opening on the back of the bird. There are a few ways to do this, and I would suggest a good YouTube search to find the right stitch for you. Mine is a mismatch of a few different techniques that I'm not sure the name of, but whatever it is, it disappears and just looks as if it was machine sewn.

As with a few of the other steps, the eyes are up to you! You could paint them on, you could use an embroidery technique called a french knot, you could use beads like I did or you could use some other technique that I haven't thought of yet. It's all up to you, which is the fun of sewing everything yourself.

Ta-Da! You are finished and have yourself a brand new plush bird.

These little things are great as pin cushions, ornaments, pieces in a mobile, decorations for your shelves, toys and much much more! I myself am thinking of doing a spring tree. Like a Christmas tree, but it will all be spring themed. That way i have a reason to keep my tree up longer!

If you happen to make any of these yourself, I myself would love to see them, but I bet Kerry of Kid Giddy would be way more excited! So make sure to tag Sizzix and Kid Giddy so they can see your amazing projects!